Rowin' on the River 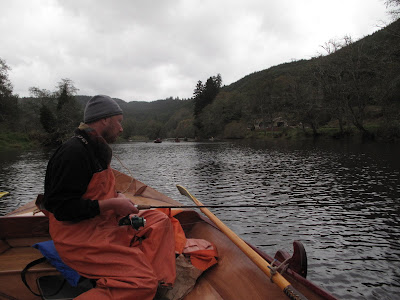 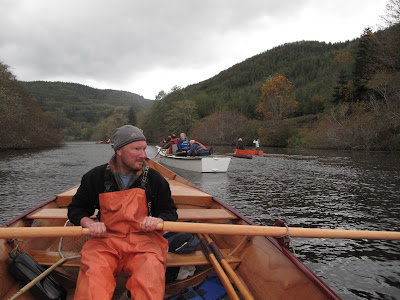 As I hitched up the boat I could hear the surf pummeling the Oregon Coast even though my house is more than a half mile from the beach. This weekend the storm-warning flags flew for the first time in months. Driving south along the coast highway the wind buffeted Ravn on the trailer.
I picked up my friend, Scott, in Newport. He brought his fishing pole and net because the salmon are running up the Yaquina River. Both of us brought our foul-weather gear.
As we drove east the wind abated, but the sky was a threatening rain. We got to Elk City around 1 p.m. to total calm and no rain, conditions that would persist until about the last mile of our row. Nine other boats were there from the Western Oregon Messabouts (the Coots) -- 14 other Coots and spouses. it was an interesting group of boats that included a Bogler Light Schooner, two canoes, a Puddle Duck Racer, a Footloose Skiff designed by Warren Jordan, a Pete Culler Good Little Skiff and a Paul Gartside Riff.

We rowed six miles down the river on a falling tide that sometimes gave us as much as a two-knot push. The salmon were jumping and rolling all along the six miles of river, but Scott didn't get a bite. Only one other boat we passed caught one and it was dark (past its prime), they said.
I rowed most of the way while Scott fished. He did try out the new oars and agreed with me that they could stand to have more wood removed from the shaft between the leathers and the blade. We rowed double for a while: four oars first, then we both sat on the same thwart and rowed one oar each. The surprising thing was that we seemed to go as fast each rowing one oar as we did under four oars. What will it be like with four rowers!?
The weather was very nice for late October, no wind or rain and about 60 degrees. Then, about a mile from our goal, a gust of wind so sudden and strong that it took your breath away struck us and it started to pour. Everyone was ready with the rain gear and no one looked too uncomfortable, but we were all ready to get out by the time we reached the Quarry Boat Launch.
Mary, who organized the event with her husband Michael (a.k.a. Doryman), ferried the drivers back to their towing rigs. Once back at the boat launch, many helpers made loading the 10 boats a quick operation.
We then went to Pigfeathers, a great little BBQ joint in Toledo. The food, the company and the service was awesome! A nice end to a great rowing event!
For more (and better) photos got to Doryman's blog and John Kohnen's photos.
Posted by Brandon Ford at 6:00 PM 1 comment: 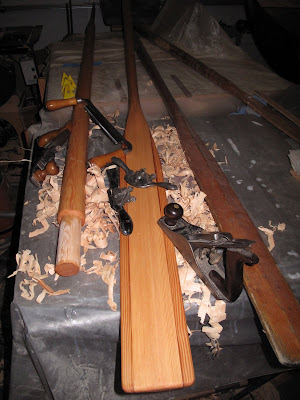 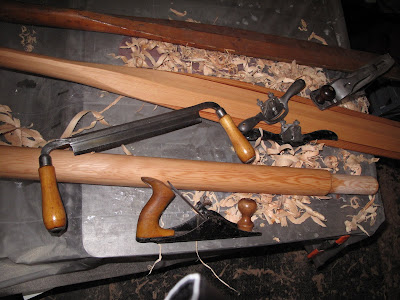 Last night I finished the 10-foot pair of oars I've been working on for the past five weeks or so. Gluing up the blanks was a bit of a pain, so I dilly dallied around, putting off the parts I didn't like. After the glue up, the project went quickly.
I enjoy working with draw knives and spokeshaves and soon I was ankle deep in shavings. My Stanley No. 40 scrub plane and my Stanley No. 3 small smooth plane came in handy as well. Both these planes are more than 100 years old and work every bit as well now as they did when they were made. I suspect the 10-inch draw knife and the two spokeshaves are at least close to the same age, but Stanley planes are much easier to date because of the changes in the Stanley logo and the innovations the company made to their planes.
I used Douglas fir because I couldn't find spruce of the right size. As I was finishing up this pair a friend suggested that Port Orford cedar would be another good wood for oars, and I have no doubt he's right, but that's another difficult wood to find. The oars turned out heavier than I wanted, but they seem to be well balanced.
I used a pair of Norwegian oars that are more than 50 years old as my guide. These are the most beautiful set of oars I've ever seen. I just wish they were long enough, but, alas, they are only eight feet long.
I will see how well they work tomorrow on a 10-mile row from Elk City to Toledo, Ore., on the Yaquina River. My friend, Scott, who loaned me his 9-foot oars, is coming with me. This is a Western Oregon Messabouts/Traditional Small Craft Association event. The weather is not shaping up all that great - looks like we will have wind and rain - but the tide will be in our favor. A spring tide should give us about a two-and-a-half knot push. Afterwards we are eating BBQ at Pigfeathers, a great little restaurant across from the Toledo City Docks.
Posted by Brandon Ford at 9:52 PM 3 comments:

A row with neighbors 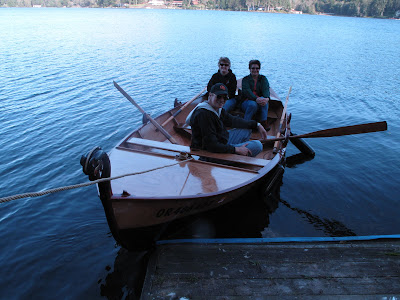 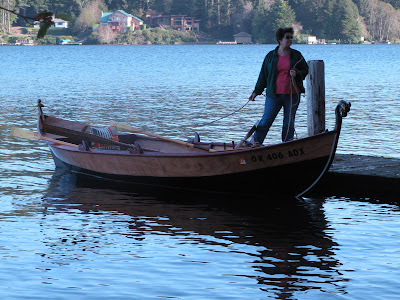 On Columbus Day I took my neighbors out for a row on the lake near our homes. I wanted to repay Ray for all the help he gave me during the building of Ravn. I also wanted to see how she would perform with four adults on board.
The weather was beautiful -- sunny with a slight breeze. I brought my 8-foot oars as well as the 9-footers I'm borrowing from a friend. Both Ray and I rowed and she move smartly along. Both our wives were in the princess seat and everyone had plenty of room. The boat was amazingly stable, which is great when you are loading and unloading folks who are not used to being around small boats. We all agreed after the row that we could have had a couple of grandkids in the boat without overcrowding the boat.
Meantime, I'm almost finished with the final shaping of the 10-foot oars I'm working on. And across the country Rick launched his Valgerda on Columbus Day.
Posted by Brandon Ford at 9:09 AM No comments: