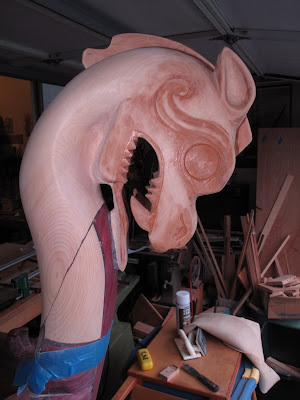 There are some projects on a boat the will go on for ever if you let them. Such is (was?) the figurehead on my boat. I could not leave it alone! I would walk by the bow of the boat on my way to do something else and grab a carving gouge or my patternmaker's rasp or a scrap of sandpaper and an hour... or two... or three later I would still be at it. I worked like I was in a trance.

There are at least two dangers in this: one is that you don't get anything else done (which happened to me since I was supposed to be building a cradle for my new grandson, Corbin, who came two weeks early) the other is you can get carried away and ruin what you are working on -- a slip of a carving gouge could really have set me back.

I decided today that I would allow my self 30 minutes for some final sanding, then I would paint the damn thing. In the background of this shot you can see the spray paint can containing the primer. Right after I took this picture I finished masking it and primed it. Now I can finally move on to other projects on the boat and finish the cradle.

I missed the first wooden boat show of the season in Depoe Bay so I could go to Washington and see my new grandson. This lets me procrastinate finishing the boat a little longer. I am feeling the pressure to get it done because we are beginning to have some very nice days. Days that would be great for sailing and rowing.
Posted by Brandon Ford at 9:32 PM 5 comments: 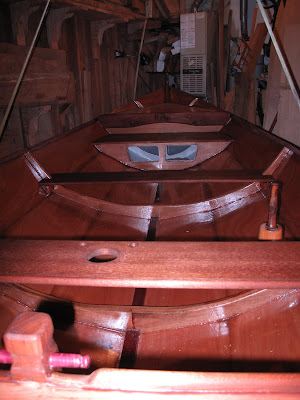 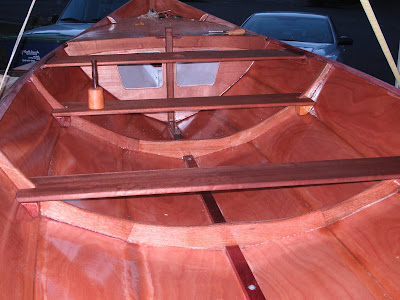 Got some finish on the thwarts and combings. I'm trying to make all the mystery mahogany look somewhat coherent.

I had some problem with a batch of epoxy: it did not kick. After three days it was still sticky. Luckily, it wasn't an important joint, just some filler around the base of the figure head. I scraped it all off and mixed another batch, which kicked off like a champ.
Posted by Brandon Ford at 1:37 PM 2 comments: