It was more than two years ago that my wife and I decided to buy a sailboat and go cruising. This was and is one of the most exciting and life-changing decisions ever and we are both fully committed to it.

It means selling or giving away everything that won't fit on our Columbia 43 sailboat Oceanus. Everything includes Ravn.

Over the last two years I've made some half-hearted efforts to sell her - a few ads on Craigslist and other places - but I was busy working on Oceanus and I didn't want to think about it. Then we listed our house for sale and right away got an offer. With closing looming in just a few weeks, I had to do something.

As luck - or fate - would have it, a kindred spirit appeared to take stewardship of Ravn, thanks to his observant and angelic life partner.
A meeting at an informal social gathering lead to Mary and Paul visiting my dirty garage shop to look at Ravn. After nearly two hours of questions and tale swapping, we struck a deal. As Mary and Paul were leaving I said, "Paul, you're going to love this boat."

"I already do," he replied. There was nothing he could have said that would have made me feel better.

The following Saturday we went for a sail on Devil's Lake. It's was about 6 p.m. when we met at the launch ramp. I was tired from working on Oceanus all day and the previous day. My fatigue melted away once we launched Ravn. The wind, which had been blowing 20 knots all day, settled down to a more pleasant 10 knots.

All three of us rowed the boat. Paul owns a peapod and is an experience rower. He loves it and it shows. We talked about oar placement and he already is thinking of how he could improve Ravn's rowing performance.

Then I hoisted sail. After I demonstrated the querks of a push-pull tiller, I handed it over to Paul. Ravn sparkled under the breezy conditions. Paul put her through her paces with a smile on his face. Meantime, Mary moved freely about the boat and found her favorite perch sitting on the foredeck. Only the growing twilight put an end to the sail.
My big worry in selling Ravn was that she would go to inexperienced and unappreciative owners. Paul and Mary are just the opposite. I wish them well in all their future adventures with Ravn.

I have included Mary as an author for this blog. Below is her first contribution. Let's hope for many more.

Mary:
Paul, a lifelong mariner, is the proud new owner of Ravn! Recently retired, Paul spent his life on the sea beginning with service in the U.S. Coast Guard where he was stationed on the west coast and got his first taste of Alaska.

After college (where at 5’11” he was deemed too short for the rowing team), he worked for the Alaska Department of Fish and Game, but the pull of the sea was strong. He chose life as a skipper in the king crab fleet in the heyday of that fishery. Later, after cruising with his family on the sailboat Moonshadow, Paul took a temporary job as a yacht captain in Florida which turned into a third career.

Alaska continued to beckon, however, and when a buy-back boat from the king crab fishery became available, Paul had the opportunity to combine his past boating experiences into a new venture as part-owner and captain of a privately-owned vessel in the Northwest and Alaska research fleet.

With his recent retirement, however, Paul is now proud to be the full-time Captain of the lovely and capable faering Ravn, rowing and sailing to his heart’s content. Paul plans to use Ravn to enjoy the beauty of the Pacific Northwest with life partner Mary, who gifted Ravn to him to celebrate the momentous occasion of his retirement. Look for news of their adventures - exploring, camping, and filling the boat with family and friends at every opportunity.
Posted by Brandon Ford at 8:12 AM 2 comments:

Ravn is for sale

I thought when I built Ravn she would be my last boat. That I would sail her until I could sail no longer. She turned out even better than I expected, and I expected a lot. Every time I take her out for a sail or a row she delights me.

But now I must sell her. I will miss her, but where I'm going she can not come. My wife and I recently bought a new boat that will be our home and our magic carpet to take us to warm waters and places I have dreamed about since I was a boy. We want to follow Emerson's directive: "Live in the sunshine. Swim in the sea. Drink the wild air." So everything that doesn't fit on the boat must be sold, including Ravn.

Those of you who know me or read this blog, know that I have lavished time and used only the best wood and materials on this boat. I never intended to sell her. Who I sell her to is almost as important as what I sell her for, so I'm hoping my friends and readers of this blog will find a good new steward for this excellent boat.

I need to sell Ravn for $7,900. I, of course, think she is worth much more than that. Here's what she is and what is included in the sale:


Serious buyers may contact me at brandonfordus(at)yahoo.com.
Posted by Brandon Ford at 9:47 AM 4 comments:

Things I did right: No gooseneck

Atkin specifies a fixed gooseneck to attach Valgerda's boom to the mast. This does not make sense for an oar and sail boat. The boom would be in the way all the time you weren't sailing; whacking you in the head when you row and adding significant windage. It would also make setting up and striking the rig more difficult.

My solution was to replace the fixed gooseneck with boom jaws and a simple rope downhaul. Here's what I like about it:

A faering full of Fords

I filled the faering full of Fords and we sailed Budd Inlet the Saturday before Memorial Day. There was plenty of room with six aboard: my youngest son, his wife, two kids, my wife and me. Several times during the sail the center thwart was empty.

I had fun with a hand-held GPS. Sailing back to the boat launch we topped five knots. A great sail!

In the week since the adventure my son says all by grandson talks about is "papa's boat." It must be true. He spent the night with me and the first word out of his sleepy 2-year-old mouth this morning was "Boat!" My boy.
Posted by Brandon Ford at 6:30 PM No comments:

Those Port Townsend folks really know how to put on a fun boating event. Virginia and I took Ravn to the first Pocket Yacht Palooza of the Port Townsend Pocket Yachters. The group is laid back with no rules or other silliness. It's much like the Western Oregon Messabouts (Coots).
We put in at the Port Townsend Marina and rowed to the other end of town with a light wind on the nose. We thought about beaching Ravn, but ended up going into the Point Hudson Marina with a couple other Palooza boats.
The show attracted an interesting group of boats from little dinks to small cruising sailboats, including one, a 20-foot Flicka, that sailed Micronesia to Hawaii to Port Townsend.
One of the nice things about the event is that fiberglass boats were not discriminated against so it increased the diversity of the boats. There really were too many kinds of boats for me to name here, but if you go to the Pocket Yachter's web site and look at the pictures you will get a good idea. Marty, one of the main springs of the event, had new pictures posted right after the event.
We enjoyed the spot inside the Point Hudson Marina across the dock from the beautiful schooner Martha, Jimmy Cagney's old yacht. Having Ravn in the marina took us out of the action, but that wasn't entirely a bad thing.
It was also the Rhododendron Festival in Port Townsend. Some at the Yacht Palooza lamented that it fell on the same weekend as the festival with with increased parking hassles and other problems. But my wife said it was a great opportunity for more people to see how beautiful, versatile and fun small boats can be.


My wife and I watched some of the parade before heading back to the boat for a little nap in the sun. As we reclined in the boat we could hear the bands play and the announcer, whose standard line with each entry was, "aren't they great! What would we do without you."
After the Palooza we sailed most of the way back to the marina, ghosting past much larger boats. The wind was still light, but faerings are pretty slippery and it doesn't take much to make them go.
Posted by Brandon Ford at 12:24 PM 3 comments: 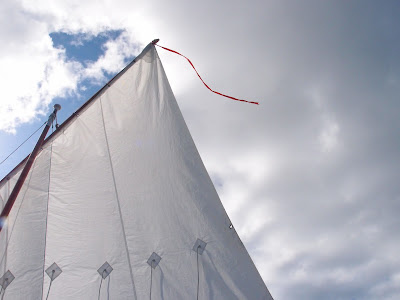 Trouble the Sailor Dog and I went for a sail yesterday on our local lake. The day was just too beautiful to resist.


You'll notice that Trouble took her ease on the foredeck, which didn't work out so well for her. In the later photos you may also notice she looks a little damp. One of the nice things about Ravn is she is roomy enough for a wet dog to shake off gallons of water while the helmsman stays perfectly dry. 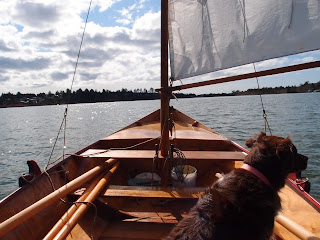 The winds started out nice and steady from the northeast, then died completely. I spent some time drifting aimlessly thinking it is a perfect metaphor for my life recently. Then the winds filled in from the southwest and Ravn came back to life. Perhaps I will find new direction with a change too.
Posted by Brandon Ford at 2:17 PM No comments:

Prudent, or just a chicken?

After what seems like weeks of cold, rainy weather we got a little sun. All day yesterday I was wishing I wasn't at work so I could take Ravn out. Today wasn't supposed to have any sun, but by late morning it broke through and I hitched up the boat. What was a nice breeze at my house turned into fairly strong wind at the boat launch that's five minutes away. Nevertheless, I stepped the mast, tied the halyard to the spar and put the oars through the humlibands in preparation to launch.

As I was walking to the truck to launch, I got hit with a 40-knot gust. I hesitated; weighing my feelings. Was it fear I was feeling, or instinctive warning that one ignores at one's peril? I guess I will never know: I unstepped the mast, strapped my little faering down and headed for home.

The one job I've been putting off is leading some lines to make reefing easier. Maybe if I had those in place I could have tied a reef or two in and had a great sail. One more thing on the to-do list. I really hate being a fair-weather sailor. 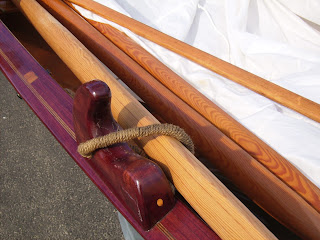 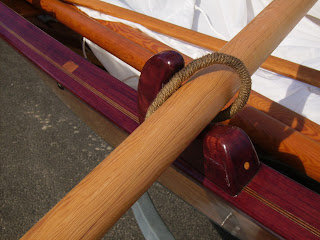 I did get some good photos of the newly-served humlibands while they were out in the sunshine.

It is now four hours later and the clouds are back. The sun is gone. Again.
Posted by Brandon Ford at 5:30 PM No comments: